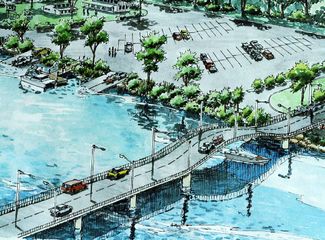 Lobbyists for the construction of a bridge across the Burrum River, just south of Buxton, have renewed calls for it to be built to divert traffic away from the Bruce Hwy.

Buxton Bridge Steering Committee spokesman Doug Walters said the bridge would permit traffic between Hervey Bay and Bundaberg to avoid the stretch of the Bruce between Maryborough and Childers.

“It is one of the worst black spots in Queensland at the moment,” Mr Walters said

“If we build the bridge we will have an alternate route between Hervey Bay and Bundy that could take 80km off the round trip and about an hour’s travel.”

The RACQ has indicated that this alternative route could reduce traffic on the Bruce between Bundaberg and Howard by 20%.

Mr Walters said a recent petition circulated in Buxton had gathered universal support from the 300 residents who live in the town.

He conceded that funding was an obstacle as there would need to be about seven kilometres of road constructed as well as the bridge.

“But it is all flat country and advice I have been given is that the bridge itself would be low cost as it is at the narrowest part of the river where it is all rock. It would be easy to establish the footings at low tide.”

Sourced from the local paper & published by Henry Sapiecha